(Lanka-e-News -29.Sep.2021, 11:45 p.m.) “This is not a Sinhala-Buddhist country”. This war cry, proclaimed triumphantly in the Deep South after the Easter bombings, was probably Mangala’s most famous words. And rightly so, because they captured the essence of man. The attacks unleashed a volcano of fear and hatred that no one could stop. Most were silent, some were trying to calm down. It was only Mangala who dared to face it. This confrontation arose out of compassion. Compassion which also led him to comfort. From his house in Matara, which served as the Mothers’ Front office in the 1980s, to the Eid dinner at his Muslim bodyguard’s house after the attacks, Mangala has always cared for those who lived in the shadow of the ‘oppression. He was often the only leader to speak out or walk in solidarity. As a friend said, with Mangala “the power spoke the truth”. This is why his loss continues to be felt in every corner of the island and will be for many years to come.

Mangala’s keen vision for her beloved Sri Lanka arose out of her love for people. His dreams were not barren plans but rich and colorful tapestries woven from the joys, hopes, laughter and tears of the people he met. The discrimination he personally felt did not make him bitter. On the contrary, it endowed him with great sensitivity. He wanted nothing more than for Sri Lankans – individually and collectively – to be free and reach their full potential. Think their own thoughts, do what makes them happy, and celebrate life in all its glory. Amid the deep disappointment and betrayal he felt after the last presidential election – many will remember his tweet from that day – he considered withdrawing from Sri Lanka to travel the world. That thought vanished when, a few weeks later, he traveled to Matara and met his constituents. They had been by his side for decades and had always accepted him as he was. Retirement discussions are over. Resolve returned and began to prepare to pull Sri Lanka out of its post-independence quagmire.

Courage is perhaps the virtue that politicians lack the most, but wisdom comes next. As we all know, Mangala was more than a brave dreamer. He has held many of the top positions in the state and was, for many years, Colombo’s most influential power broker. His accomplishments and regrets have been recounted by others. But Mangala was bigger than his office, his influence or his accomplishments. He was a leader. His ideas and his example were and remain a rainbow for all of us.

Mangala’s wisdom was practical. In politics and in the art of government, noble ends are often necessarily achieved by despicable means. Knowing, but also knowing when to stop, when not to cross a line, is the central ethical challenge for any statesman. Mangala was incorruptible. But he also understood that if he did not grant thousands of jobs to his constituents, dreams would remain dreams. He understood power as only a politician can; he studied its many forms and practiced its many arts. He was a master of the secret alliance, the subtle escape, the sharp rumor, the clever seating arrangement, the selective dinner invitation, the carefully chosen gift, and the heartfelt flattery. Yet it is the mastery of his conscience over the siren song of power and office that has made him a statesman, whose stature will grow rather than diminish over the years and decades. He took laws and institutions seriously. But he knew their limits. Ultimately, the power was in politics: in votes, ideas and emotions. It was his main arena, where he bent perception to shape reality.

I only knew Mangala at a time when this intuition had matured. Yet it is a testament to his wit that after decades spent on the front lines of our muddy diet, more of a mutilated and crushed conscience, Mangala Experience had a more refined ethical sensibility than Mangala Innocence. As a tribute across the aisle said, he joined politics as a member of the Conscience Party and ended his days in that party.

Courage and wisdom count for little without ability and ambition. In a country where people move among their tribes – be it family, school, community or class – Mangala saw the individuals for who they were. He saw their dreams, recognized their abilities, and trusted them when no one else did. He allowed people to do what they always wanted to do. He didn’t care about sex, ethnicity, age or whatever. As long as you had passion and wanted to do something, he would be quietly there to help you.

He had the genius of uniting revolutionary and capitalist, dreamer and fixer, artist and boffin, civil servant and activist, bringing them together to serve progress and serve Sri Lanka. As one person put it, “he made our profession our responsibility”. Just as his friendships stretched across the kaduwa, his home and office bridged the English and vernacular worlds. A lesser-noticed feature of Mangala’s legacy is her low-key record of appointing women to senior positions. Always the true liberal, he made sure everyone knew it was because he thought these women would do a better job than anyone else, not because they were women. All of these people – chosen for their merit and passion, trustworthy and listened to – have largely rewarded Mangala’s trust. They worked and fought to realize his vision and gain his favor. He has also won the trust and respect of the public service.

Although politics and art were Mangala’s main passions, ironically, his successes were more important in the economic realm. We all know that the SLT revolution paved the way for the privatization of Sri Lankan Airlines and SAGT, which made Colombo one of the great ports in the world. Mangala’s Economy by Deshal de Mel authoritatively demonstrates that his tenure as Minister of Finance was no less accomplished than his triumphs as Minister of Telecom and Foreign Affairs. Even as a diplomat, Mangala’s economic record is formidable as he played a pivotal role in winning back GSP + and securing the $ 500 million grant from MCC.

Rebel blue hair, tattoos, Bowie and TikTok, Mangala was a child of Punk London. But he was also an heir to the Victorian tradition in Sri Lankan politics. He was sane, decent, and humble. Under this colorful and irreverent personality, he carried with him a political tradition of restraint that is on the way out. The distinctions between state, government and party were instinctive. He always knew what should (and should not) be said and done in the ministry, in Parliament and in political rallies respectively. He abhorred the finery of power and the trinkets of wealth which were increasingly finding favor with his fellow parliamentarians. In the age of performativity, Mangala hated pretense and hated servility even more. He had few friends among his fellow politicians. In Parliament, where meals are largely social, he often ate alone in his office. A loneliness probably made deeper by the many betrayals he has suffered over the years, which have left him deeply guarded.

I first met Mangala in her Sirikotha lair in the dark days of August 2014, when I was an amateur cameraman for Amita Arudpragasam’s constitutional reform film. We talked about Sudu Nelum, we dreamed a little and we laughed at the black magic of political gossip sites. Sri Lanka was in his head. The last time I met Mangala was a few days before her death. Overlooking the sunny Bolgoda, we daydreamed a bit, laughed at our own debauchery jokes, and talked about his protest plans in 2024 and the laws we needed to draft in anticipation. Sri Lanka was in his head.

History was on his side …

I’m not crying Mangala. His life was a life without gossip. He lived more in sixty-five years than many will live in so many lifetimes. I cry for myself and for Sri Lanka. I will always remember the rally held at the Tagore Auditorium in Matara, where Sampanthan and Mangala, representing Point Pedro and Dondra, stood in Palmyrah and Coconut while the young singers called out in Sinhala and Tamil, the audience and one the other, Peratama Yamu. Lanka. Over the days and years, our sense of loss, of lost opportunities, only grows. This is my way of not giving up: “may the double gem bless us all”.

Mangala Samaraweera passed away on August 24, 2021. He carried the hopes, often the last hopes, of many. His Lanka could take a few more decades to come true. But he believed history was on his side. Mangala is dead, long live Mangala!

We cannot continue LeN without your kind donation. 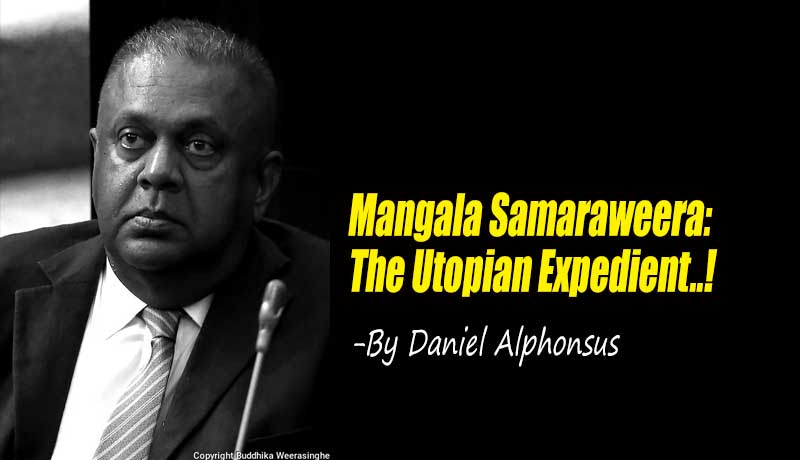